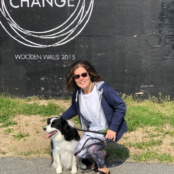 In 2004, former marketing gal, Erica Salvemini decided to follow her bliss.  That’s when she created Just 4 Paws Pet Spa, LLC. Over the last 15 years, Erica has mindfully transformed her upscale pet salon into a safe-haven of comfort and beauty for pets, specializing in compassionate pet care for all with a strong emphasis on specialized pet care services for special needs pets.

As a Reiki Master Practitioner and empath, Erica often works with pets and people in need.  Erica is able to offer gentle, non-invasive care through this energy healing work.

Also, in 2009 Erica provided grooming for dogs featured on the Today’s Show, “Pet Makeovers”. From 2005-2010, Erica collaborated with the Hartz Mountain Corporation as the company revamped its grooming products and tools sets. Erica is most proud of the purple and black slicker brush, she helped design and retails on shelves today.

In 2015 volunteered in Othello, WA to help save an animal shelter in need. Erica was a groomer host for the reality show pilot “Animal House,” which helps save or create animal shelters in communities around the country.

The Just 4 Paws Pet Spa and Academy is Erica’s latest venture.  In 2018, she started the Academy due to the overwhelming number of people asking, “Do we train?!” That is when Erica began sharing her wealth of pet care knowledge and success with all those impassioned to learn and work with animals in a caring environment.

The inception of the Just 4 Paws Franchise and Academy together hope to elevate the Pet Care Industry to a place deserving of all pets everywhere in every corner of the US and beyond. 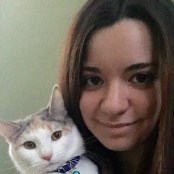 When I began working at Just 4 Paws in September of 2015, I had no idea I would be starting a journey that would change my life in such a positive way.  At the time, I had just graduated from Montclair State University with a Bachelor’s Degree in Humanities and I was unsure of what I wanted to do with my life.  One thing I knew for certain was that I always had the desire to work with animals from a young age.  So, I decided to venture off into a field that had nothing to do with my chosen college major, because I knew animals were my passion. From my first day at Just 4 Paws, I knew I found the perfect career for me!  I began as a bather and was quickly promoted to Erica’s grooming assistant.  In the process, I became our Academy’s first unofficial graduate.

Over the years I have spent at Just 4 Paws, I have been a “Jack of all Trades” so to speak.  From Bather, to Groomer’s Assistant, to our Client Specialist, to the Executive Assistant for our Franchise; I have worn many hats at Just 4 Paws and have learned so much about the Pet Grooming Industry along the way.  Now with our Academy launch, I can proudly add, “Assistant Director” to my repertoire of titles.  My hope for the Academy’s future is that we send out a new wave of talented, loving, groomers who will inevitably raise the bar in the grooming industry.  I’m so honored to be a part of something that will make such a positive impact on the grooming world.  Just 4 Paws has been such a blessing in my life and I cannot wait to give back to the Academy by helping others achieve their dream of working with animals.

Javascript not detected. Javascript required for this site to function. Please enable it in your browser settings and refresh this page.